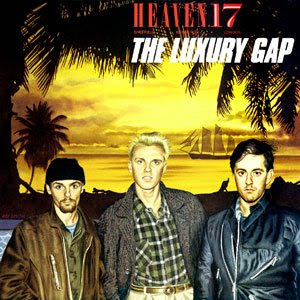 The collaboration by Martyn Ware, Ian Craig Marsh and Glenn Gregory produced one of the great unacknowledged albums of this period, The Luxury Gap was a masterwork of brooding pop synths interlaced with mature socio-political lyrics and a slice of dance floor grooviness. Pop fans of the period really only remember them for the big hits like Temptation while the purists will snub this album for the brasher debut album – Penthouse and Pavement.

Born out the demise of the original line-up for The Human League, they were always the bridesmaid to the fey disco sounds of Oakey et al. I’m not for a minute saying that Dare is in any way a worse album, its just that The Luxury Gap was a bit more grown up. Far funkier than The Human League part 2 and with the genuine satire of tracks like Let’s All Make a Bomb. This was fine, enjoyable song writing of a kind that they would never match. When I got to college in the autumn of 1984 I began listening to music in a way that I hadn’t done for years. Sometime around 1981ish I’d flogged all my punk and new wave vinyl for some paltry sum to a fellow sixth former (quite why I still can’t fathom). I know the death of my mum had hit me pretty hard but I switched off almost entirely from new music. I went to Australia (hardly stretching the musical boundaries) then came back and found a new girlfriend who only seemed to like listening to gospel music. I had reached a musical nadir. I worked in a clothes shop for the summer before going to college and failed to recognize the likes of Wham! and Frankie Goes To Hollywood playing over the speakers – even if they were some truly awful cover versions because the shop wouldn’t pay for the originals.

Anyway, I got to college and met Kurt who introduced me to The Fall. I didn’t really have much choice because Kurt played them incessantly. And I hated them. It seemed a sprawling horrible mess of a sound. Mark E. Smith did not make proper music I thought. But something happened at some point. I haven’t a clue when, but the penny dropped and it made sense. I started listening to music with fresh vigour and an open mind. So thank you Kurt. And thank you Mark Smith. If only they made some stuff like this again.