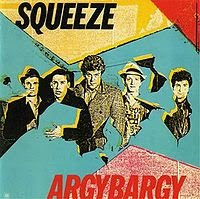 Unlike The Stones or The Beatles in their later years, Squeeze were never really an album band. To talk about them in the same breath would for some cause mutterings I'm sure. However, for all their short writing career together Difford and Tilbrook were in many ways the equal of Lennon/McCartney or Jagger/Richards. Their output of singles during the late 70's and early 80's was constant in consistency and quality. Such was the plethora of choice I was really tempted to pick '45's and under' as one of my greatest albums. However my purist side meant I was forced to choose one of their studio albums and the third album ArgyBargy I consider to be the best - even more than East Side Story, the Elvis Costello produced effort a year later. This was Squeeze with their classic complement of musicians before Jools Holland left to pursue a solo career. The song writing was quirky and tuneful and full of poetic lyrics about love and loss and romance and youth. I have stayed away from the later joint collaborations - perhaps because I don't want the bubble of respect to burst and I want the best tastes left in my mind. You might well disagree but for me this was singles perfection.
Squeeze - Pulling Mussels (From the shell) (mp3)
Posted by Salopian at 1:13 PM

Nothing since October then four posts in two days? And such choice cuts too - you're spoiling us. Better lie down now.

Yes thanks Mick - I feel the urge once more. As it were.